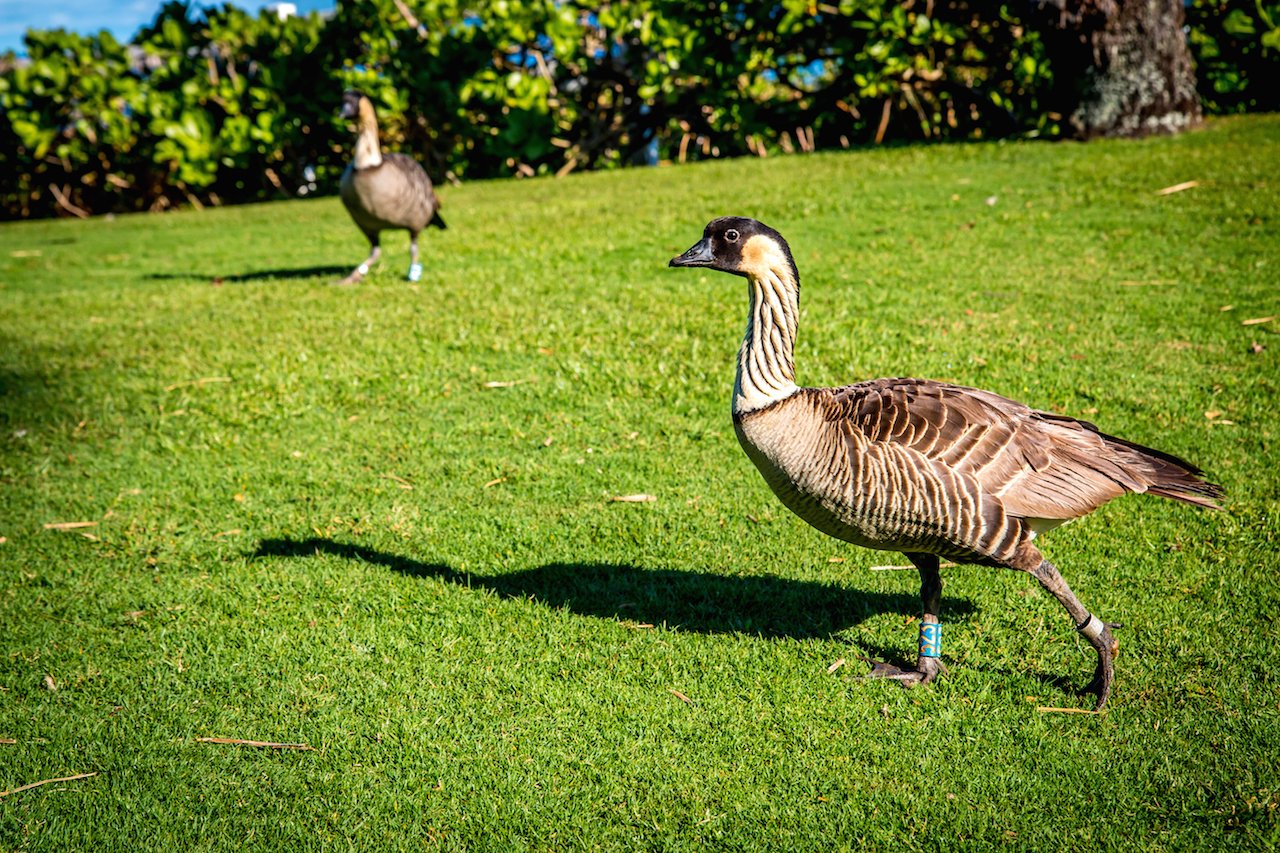 Birds are probably not the first attraction most people think of when they dream about visiting Hawaii or the other islands of the Polynesian Triangle.

But once you get your fill of glistening waters in every possible shade of blue, grand landscapes that tower like skyscrapers, gregarious indigenous cultures, and gorgeous tropical sunsets, these islands forests are well worth exploring.

The Polynesian Triangle encompasses around 10,000 islands in the central and southern Pacific Ocean, stretching from Hawaii in the north to Easter Island in the east and New Zealand in the west.

Though the five main Polynesian island groups (Austral, Gambier, Marquesas and Society Islands, and the Tuamotu Archipelago) offer just 1,609square miles of land between them, theyre home to more than 120 different bird species.

Of these, 27 are endemic to the Polynesian islands, and the same number are currently under threat of extinction.

Due to their small populations and limited range, youre much more likely to see migratory birds in Hawaii and Bora Bora, including albatrosses, boobies, egrets, frigatebirds, and herons.

But heres a look at some of the more rare and beautiful birds of Hawaii and the Polynesian Triangle,including identifying features and info on their current conservation status.

READ MORE: The Top 10 Polynesian Islands to Visit in the Polynesian Triangle

Birds of Hawaii and the Polynesian Triangle Guide

There are roughly 90 species of Kingfishers of the world, four of which are endemic to the Polynesian Triangle.

All of them have huge heads, pointed bills used for catching fish and small invertebrates, short tails, and stubby legs. Most of them have bright plumage and nest in tunnels dug into the ground (though some prefer abandoned termite nests).

With its blue-green upper body and brown crown, the Tahiti Kingfisher(a.k.a. Society Kingfisher) is the most frequently seen species in Polynesia. Its found in tropical forests throughout the Society Islands of Tahiti.

The other three endemic Polynesian Kingfishers are all critically endangered. The Marquesan Kingfisher is a striking beauty bright blue-green on bottom, mostly white on top, with blue eye stripes and a buff triangle on its back but there are less than 500 left.

The blue, orange, and green Niau Kingfisher is found only on the island for which it was named, with around 125 birds left in the wild.

The blue, cream, and rufous-colored Mangareva Kingfisher is also found only on Niau, with a population of around 135 (up from around 50 a decade ago).

You may also see the more commonBelted Kingfisher in Hawaii. Native to North America, this medium-sized kingfisher features a slate blue head, large white collar, a large blue band on the breast, and white underparts. Interestingly, this is the rare bird species where the females tend to be more brightly colored than the males.

READ MORE: The 20 Best Things to Do in Kauai, Hawaii (For Nature Lovers)

The Hawaii state bird is the Hawaiian Goose, whichis commonly referred to as the nn (pronounced nay-nay) due to the undeniably weird call the bird makes.

One of 40+ species of native Hawaiian birds that are nearing extinction, the rare goose once inhabited many of the Hawaiian islands. But today they are only found on the islands ofHawaii, Kauai, and Maui.

Although they are believed to have descended from Canadian Geese, the nn is considerably smaller, standing about 16 inches tall, roughly two feet long, and weighing 3.5 to 6.5 pounds.

Their distinctive coloring includes black faces and caps,buff cheeks, grey/brown/white feathers (including a tuft of soft feathers under their chins), and deeply furrowed necks with black and white diagonal stripes.

Currently the worlds rarest goose, the nns total population was estimated at around 25,000 before Captain James Cook discovered Hawaii in the 1770s. But by the mid-1900s only 30 were left, all on the Big Island.

The Hawaiian Goose was finally declared endangered in 1967, and they remain protected today.

Related to Rosefinches, Hawaiian Honeycreepers are ancestors of passerine birds from Asia, who first arrived on the Hawaiian Islands between 5.7 to 7.2 million years ago (around the same time the islands of Niihau and Kauai formed).

There were at least 56 species of Hawaiian Honeycreepers that spread to the various islands and evolved to the volcanic landscapes (much like Darwins Finches in the Galapagos Islands). All but 18 of those species eventually went extinct.

One of the more common Honeycreepers in Hawaii today is the Apanane, whose vivid red feathers were often used to make capes and leis for Hawaiian nobility. Theyre found foraging in forest canopies on at least six Hawaiian islands, and serve an important role as pollinators.

The iiwi (a.k.a Scarlet Honeycreeper) is another common, beautiful native land bird in Hawaii. Itsscarlet body, black wings and tail, and curved, salmon pink bill (which is used for drinking nectar) make it easy to spot against green foliage.

The endangeredAkiaplauuses its curved beak like a woodpecker to feed on insects hidden in trees in the mountain forests, while the endangeredHawaii Akepafeatures bright orange feathers (males only) and nests innaturally occurring cavities in the trees of old growth forests.

The Monarch Flycatchers encompass around 100 different passerine birds. All are small, broad-billed, insect-eating songbirds with long tails (some of which are spectacularly colorful).

Their preferred habitat is forests or woodlands, where many decorate their cup-shaped nests with lichen.There are five species of Monarch Flycatchers that are endemic to these exotic islands.

With around 500-1250 nesting pairs on the Marquesan island of Ua Huka, the black-and-white Iphis Monarch is the only one not currently nearing extinction.

The endangered Marquesas Monarch has a small, stable population on the island of Mohotani, but it is being threatened by habitat degradation (by feral sheep) and predation (by feral cats).

The black Fatuhiva Monarch (found only on the Marquesas island for which its named) and Tahiti Monarch, and the black-and-white Ua Pou Monarch are all currently classified as Critically Endangered by the International Union for the Conservation of Nature.

The latter species, which is found only on the third largest of the Marquesas Islands, was believed extinct until a sighting was reported in 2010. If you see one, congratulations: Youve officially spotted one of the rarest birds in the world!

Thereare three species of Monarch Flycatchers endemic to the Hawaiian Islands: The Hawaii elepaio(which lives on the Big Island), the Oahu elepaio, and the Kauai elepaio. The Oahu species is currently listed as Endangered, while the other two species are considered Vulnerable.

Lorikeets are brightly colored, small to medium-sized parrots distinguished by the brush-lipped tongues they use to feed on flower nectar and soft fruits.

Theyre widely distributed throughout southeast Asia and Australia, with three species endemic to the Polynesian Islands. All of them are increasingly endangered by deforestation and the introduction of Black Rats.

Found in the Austral Islands and the Cook Islands, the Kuhls Lorikeet is the most vibrant of the three. With its bright red belly and cheeks, blue nape, and green back and crown, its vivid colors make it particularly vulnerable to hunters.

The Ultramarine Lorikeet, with its green back and wings and spotted cheeks and throat, is also rare, found only on Ua Huka island in the Marquesas.

The Blue Lorikeet is the most common parrot species in Polynesia. With dark blue plumage offset by a white throat and orange beak and legs, theyre found on at least 8 different islands and have been successfully bred in captivity.

None of the parrots in Hawaii are actually native to the islands. Although you may see species such as the Red-masked Parakeet or Rose-ringed Parakeet, they were all introduced and are generally considered an invasive species.

READ MORE: The 15 Best Kauai Waterfalls to Visit (& How to Get to Them)

The Swiftlets are a group of around 30 species found in Australia, southern Asia, and the islands of the South Pacific.Their narrow wings make them speedy fliers, with wide mouths and tiny beaks that are made for catching insects in flight.

But what truly makes them unique (even from other Swifts) is their bat-like use of echolocation to navigate through darkness in the caves and caverns in which they roost and breed.

The Tahiti Swiftlet (a.k.a. Polynesian Swiftlet) is typically found at high elevations in wet, rocky, forested valleys on the island of Tahiti, with a total population of around 1,000.

Although they live approximately 1,200 miles apart, there have been some BirdLife International discussions about classifying these birds as a single species in the future.

TheAtiu Swiftletis endemic to the Cook Islands. Known locally as the Kopeka bird, it lives in the islands limestone caves and feeds in mixed horticultural areas.

Theres also a breeding colony of Mariana Swiftlets that were intentionally introduced on the island of Oahu in the early 1960s, as their population dwindled rapidly in their native Guam.

Once considered Old World Warblers, the Warbler species found in the Polynesian Triangle have recently been placed into the Acrocephalidae family, which includes reed, marsh and tree Warblers.

Most of these birds are fairly large, fairly plain (with coloring ranging from dull brown to canary yellow), and found in marshes and reed beds.

The most endangered of these species is the Tahiti Reed Warbler: Two of its former subspecies the Garretts Reed Warbler and the Moorea Reed Warbler have already gone extinct.

The Rimatara Reed Warbler, which is found only on the Austral Island for which it is named, is currently listed as Vulnerable.

The Tuamotu Reed Warbler is very common, and widely distributed throughout the Polynesian islands.

The Northern and Southern Marquesan Reed Warblers were once considered the same species, but now each has four subspecies and are plentiful in the Marquesas.

The Japanese Bush Warbler, which has drab brown feathers and pale eyebrows, wasintroduced to Oahu in 1929. Nearly a century later, they can found on all of the main Hawaiian islands. by Bret Love; lead image of Hawaiian Goose by Bret Love & MaryGabbett