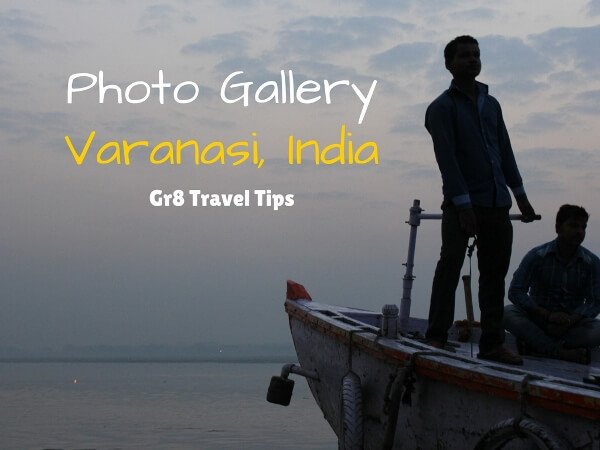 My Photo Gallery Of Varanasi India

On our travels throughout India a few seasons ago, our first destination after spending a few days in New Delhi, was to the City of Varanasi. In this post, I have included a personal 📸 Photo Gallery of Varanasi, giving you just a glimpse of this Ancient City in Northern India.

Varanasi is an enchanting city, situated on the edge of the very spiritual Ganges River. Varanasi is one of the holiest cities of Hinduism, and is also referred to as the – Religious Capital of India. The Culture is primarily centered on the Holy Ganga and thousands of Hindu pilgrims travel to the city to bath in this river.

Varanasi is believed to be the greatest pilgrimage destination between earth and heaven.

For the Hindu people, coming to the city and bathing in the waters of Ganga, is to be cleansed of the sins of thousands of past rebirths.

The combination of Kashi- the holy city, Ganga the holy river and Lord Shiva- the Supreme God, makes Varanasi an immortal destination. 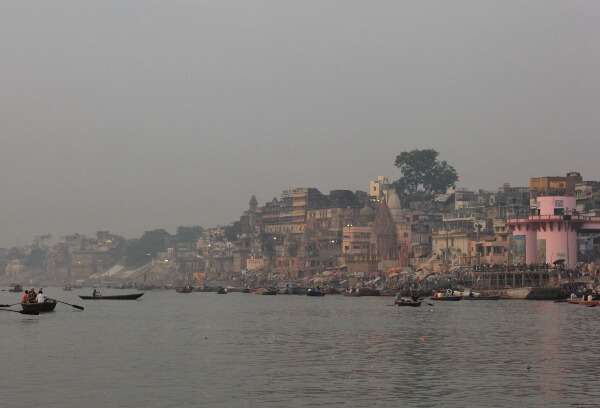 We were drawn to Varanasi because of its spiritual heritage and enlightenment, as well as it being one of the oldest cities in civilization. It is known to be well over 2000 years old, dating back to 1400 B.C.

For visitors like us coming from the western world, Varanasi is certainly not for the faint of heart. 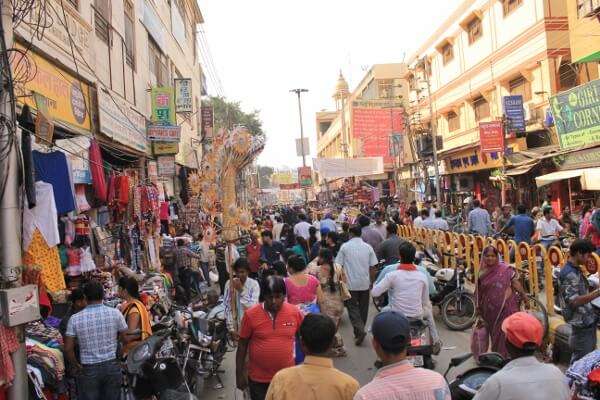 Away from the many Ghats along the Ganges River, life goes on as usual in the city.

There are a few things that the many beautiful pictures displayed in publications and on the internet of this region, simply do not show. 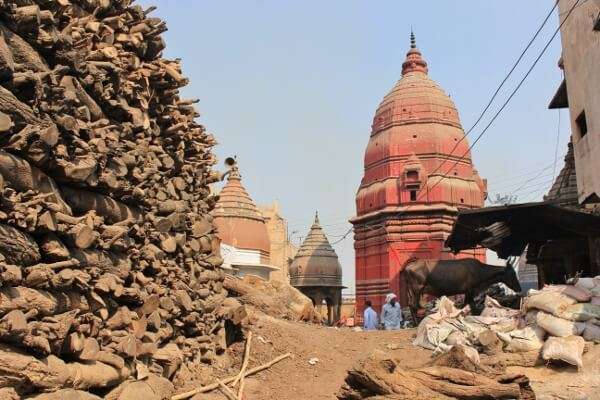 One must be prepared for the smoke and odors ever present in the area. The 🔥 cremation wood burning’s at the Manikarnika Ghat along the river occur 24 hours a day, 7 days a week.

As you can imagine, this causes a tremendous amount of continuous smoke billowing throughout the city. 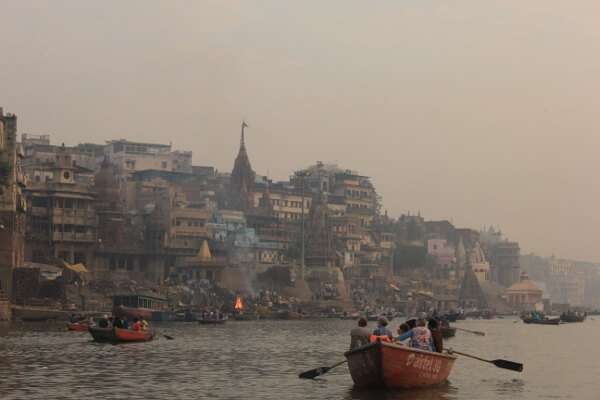 There are 🐄 cows and 🐕 dogs roaming freely everywhere, as in most destinations throughout India. So, one must be prepared for garbage, animal dung and in some cases human excrement in areas of the city as well.

Like pictures show in publications and tourist brochures, dont expect the banks of the river, the Ghats and streets to be pristine. Come prepared to expect garbage and other debris that I simply wont mention here, littered about.

Life goes on as usual in this holy city, regardless of the thousands of visitors and travelers flocking to this area each and every day. 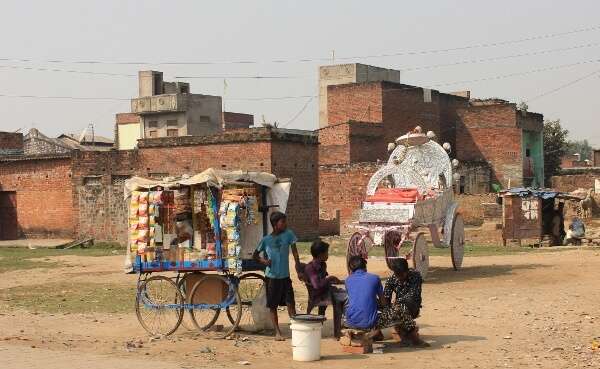 You must go with an open mind and be prepared for the unexpected when visiting this part of India.

Above all and something I believe everyone should remember when traveling abroad, is to respect the culture and customs of the people in the country in which you are visiting.

Over 80 Ghats Along The River Banks 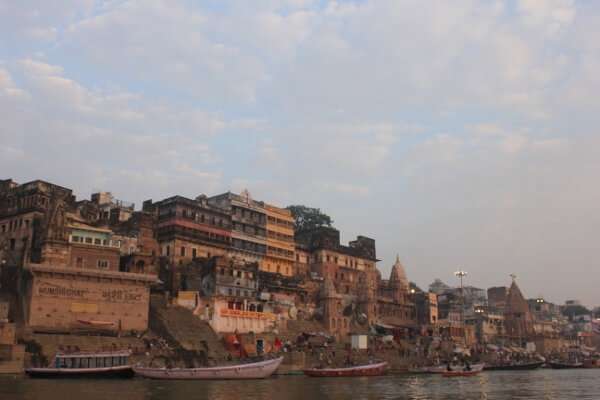 The main attraction to visitors arriving in the city, is experiencing the over eighty Spiritual Ghats along the banks of the Ganges River. This is definitely something you will not soon forget, and that simply must be seen at sunrise and throughout the day and evening.

You can spend hours simply observing people in and around the Ghats performing their spiritual rituals.

Sunrise On The Ganga 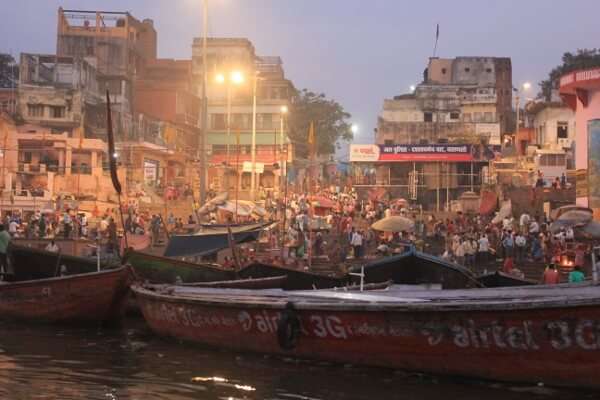 It is said that spending sunrise and the early morning at the Ghats and temples is a spiritually cleansing experience. This, for both tourists and believers alike.

Many young and elderly people from all over the world visit Varanasi, to seek spiritual comfort and closeness. 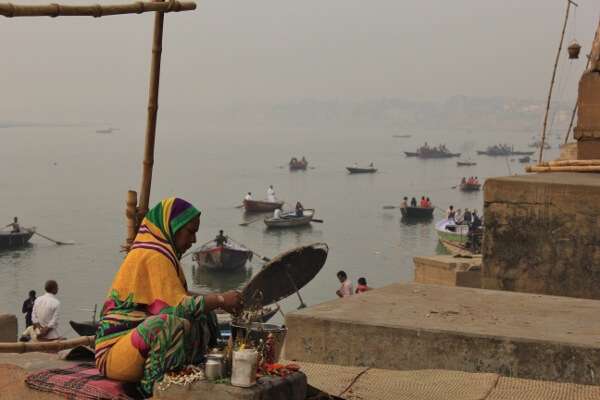 Being present at sunrise, was certainly one of the highlights of our few days spent in the city. We experienced a peaceful and private small row boat excursion on the river and alongside the Ghats.

Observing the hundreds of devotees performing their rituals along the Ghats and watching the early morning ☀ sunrise rise above the city, was amazing! 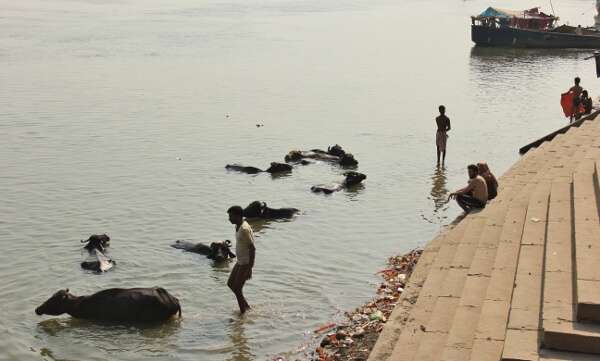 Be sure to have a look at my post and photos on our morning sunrise Ganga boat tour with 🚣 Streetwise Varanasi Tours. It was a lovely peaceful early morning private tour with our host and owner of the company.

Well worth a look if youre looking for something more unique and non touristy, like we were.

This is a very popular tourist attraction and definitely worth experiencing at least once during your stay! 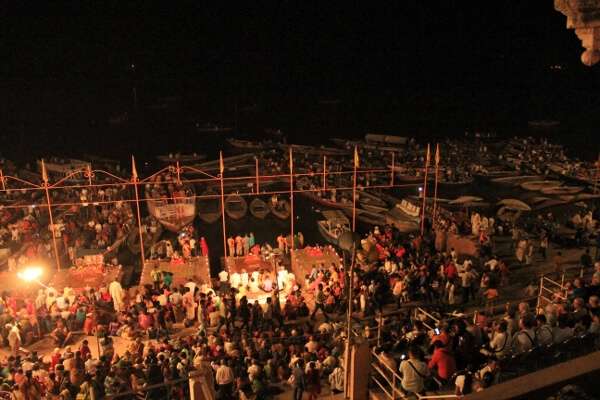 One other extremely popular gathering each evening, is the Aarti Ceremony held at the main Dashashwamedh Ghat. This is a Hindu 🔥 Fire and Dance cCeremony performed by Brahmin disciples to honor the holy river.

Thousands gather each evening for this event, so be prepared for huge crowds along the Ghat steps and on the riverfront, filled with people gathered in boats. 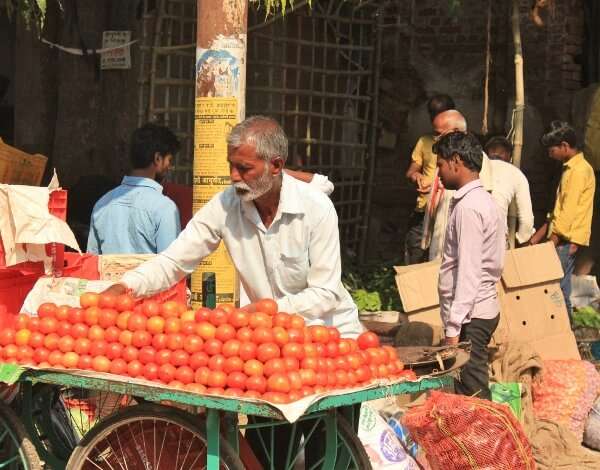 Like any other city in India, Varanasi is also a maze of back side streets and alleys for you to explore and discover daily life going on as usual in the holy city.

People are friendly and eager to carry on a conversation with foreigners, so dont be afraid to go out and explore! 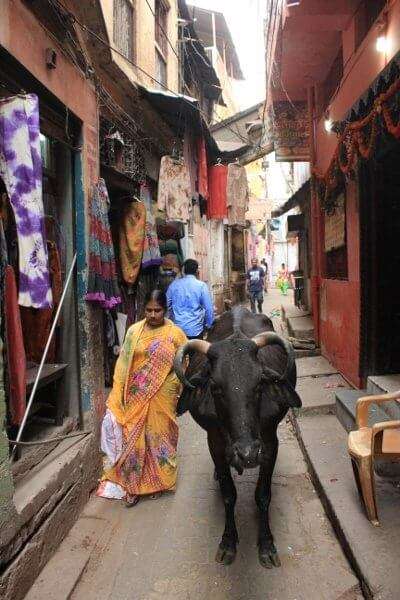 Certainly you will be approached by vendors, 🛺 tuk-tuk drivers and so forth, but they are all friendly and many are very eager to assist and help with anything you may need. Just be aware of your common touts and thieves at 🚂 train and 🚍 bus stations.

Use caution and common sense and you will be fine, just like you should traveling most anywhere else in the world. 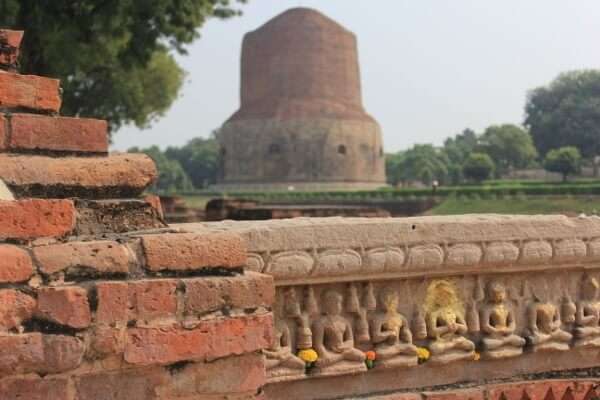 About 10km from Varanasi, is one of four most regarded Buddhist pilgrimage sites in the world.

It is said that after achieving the Enlightenment at Bodh Gaya, it was here at Sarnath that Lord Buddha preached his first sermon, consecrated as Maha Dharm Chakra Parivartan. 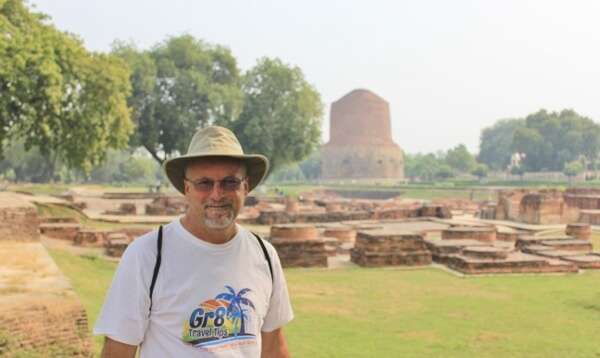 Here in a peaceful park like setting, you are free to walk along the ancient Buddhist ruins and observe the impressive 34 meter Dhanekh Stupa. This, marks the spot where Lord Buddha preached his sermon.

As well, there is the Chaukhandi Stupa which dates back to the 5th Century AD. It is said, this is where Buddha also met his first disciples. 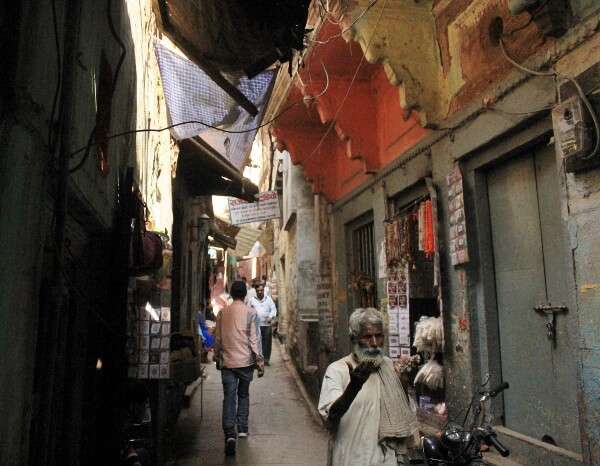 Varanasi is certainly worth including in your India travel plans, and definitely worth spending a couple of nights. This gives you time to see and explore the sites and sounds of this Ancient Holy City called – Varanasi. 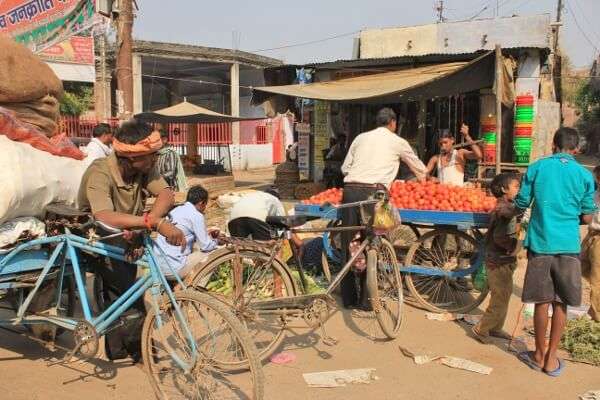 Below, I have included a ⛓ link to the Official Uttar Pradesh Tourism Website. I have directed the link to go directly to their page on Varanasi.

On that page, you can access much more detailed information on this very Historical and Holy City in India.

I hope you enjoyed viewing my personal 📸 Photo Gallery of Varanasi. Spending time here during our 7 weeks traveling throughout India, was an incredible experience like no other we have ever witnessed in all our travels around the globe.

📸   Incredible Things To Do In Varanasi India

The 25 Best Places to Spend Christmas in the USA