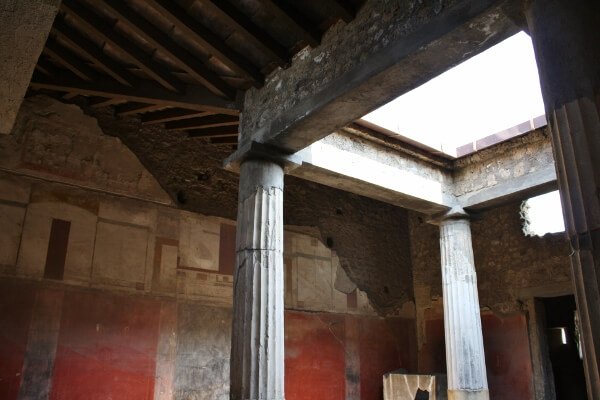 8 Historical Places In Europe To Visit

Europe has an unmatched treasure of historical places.

Most of these places have been well preserved over the centuries and filled with historical &#9905; artifacts, that communicate the history and glory of the past civilizations.

If you have an interest in history and are looking for some intriguing historical places in Europe to visit, you are at the right place.

In this article, we will introduce you to some of the historical wonders, narrating the tales of archaic civilizations across centuries.

Standing as one of the largest historical mysteries in Europe, 🧱 Stonehenge is a definite visit, if you’re looking for intriguing historical places in Europe to see.

Built around the 2nd century BC, this ginormous stone structure is thought to be a Neolithic burial ground.

Speculations related to the construction of this massive complex before the invention of the wheel or modern technology, assume that the 🧱 stones were somehow transported from a nearby quarry.

The place was declared as a UNESCO World Heritage site, visitors are prohibited from touching.

But witnessing Stonehenge from a nearby designated platform, is enough to marvel over this historical wonder! 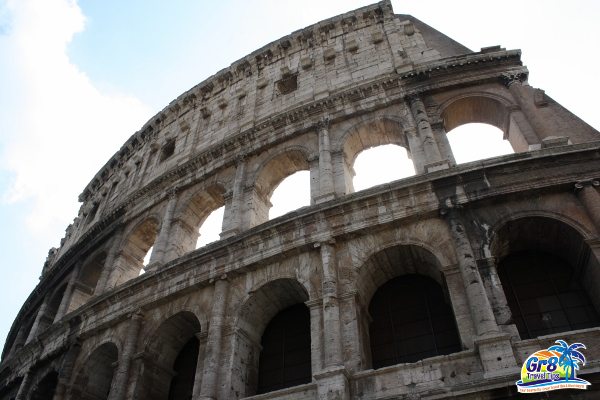 Italy is famous for more than its mouthwatering cuisine.

Monumental structures from the Roman Empire are spread across a large part of Italy.

The Colosseum in Rome, is one of the famous amphitheaters built by the Romans. The Roman Emperor Vespasian builds the Colosseum around 70 CE.

It was a grand gathering space for various sports and cultural activities, but later fell out of use and into ruins.

Despite two-thirds of the original structure being destroyed, the Colosseum is still a major tourist spot in Italy.

Thousands of tourists from all over the world, gather around this amphitheater every year to marvel at the beauty of the place. 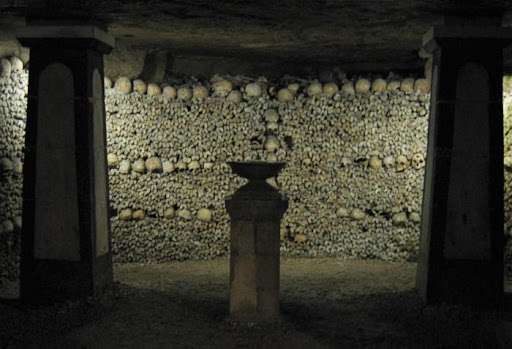 If you are a fan of both history and horror, Les Catacombs in Paris, France is your place to visit.

This creepy catacomb will surely get your blood pumping as you witness rows and rows of 💀 skulls lining the walls of the catacomb.

Les Catacombs are believed to be created around the 18th century due to the city’s inability to manage the overflowing cemeteries.

Consequently, a quarry was dug to deposit 6 million resting bodies, which became a tourist attraction for its bizarre history and appearance. 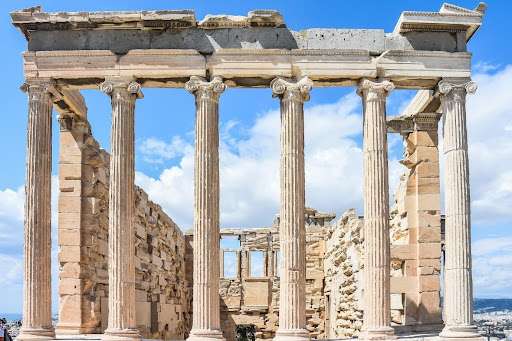 Who would not want to visit the remains of Greek civilization, to experience the glory and heritage that the Greeks left for the world to follow?

The Acropolis in Greece is without a doubt an intriguing historical landmark in Europe, that tells the centuries-old story of – Greek civilization.

Built around 447 BC, the structure is believed to be used as an assembly hall and a symbol of democracy in Greek times.

The Acropolis underwent several constructions and reconstructions over time. But the original structure of the Acropolis remains, reflective of the geometric precision and accuracy that Greeks followed in their architecture. 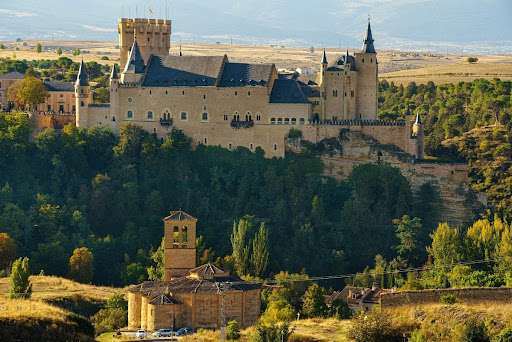 If you are a Disney fan, you should not miss out on the Castle of Segovia in Spain, the inspiration for Walt Disney’s official logo.

Built around 1120, this stone fortification was intended as a military advantage of Spanish forces, but soon became a Royal Residence of King Alphonso VIII.

The Castle was later converted to a Royal Artillery School, in which part of the Castle continues to serve the same purpose today.

The Castle is open for the public to visit (except for the school area) and is filled with period dcor and artifacts.

Visiting this historical site, you will learn about the history of Spain, including the battles, conquests and civilizations that reigned over the region. 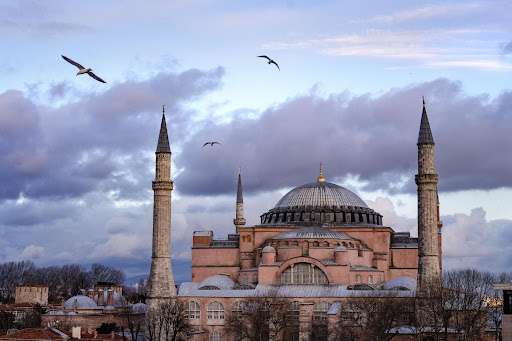 Located in Constantinople, present-day Istanbul, Hagia Sophia was built as a signature church by the Byzantine Empire.

However, with the conquest of the Byzantine Empire by the Turks, the church fell in the hands of Muslims and was converted to a Mosque.

Four minarets were added to the original structure of Hagia Sophia, in addition to the Islamic architectural dcor covering the whole building.

The mosque was designated as a Museum by the Turkish president in 1935 after the country’s secularization.

In 2020, the current president of Turkey reconverted the Museum into a functioning mosque. 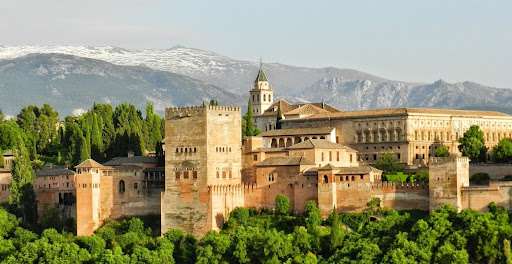 Another historical marvel reflecting Muslim art and architecture in Europe is the Alhambra Palace in Granada, Spain.

The Alhambra was initially built as a fortress but later converted to a royal palace, around the 14th century.

The fortressbuilt according to Moorish traditionsis immaculately preserved, with its numerous orchids and vineyards functional to date.

Visiting Alhambra Palace, you will be left stunned by its beauty and the intricate details found on the inner walls and columns.

The period dcor will take you back in time, where you can visit the past grandeur of the Palace in real-time. 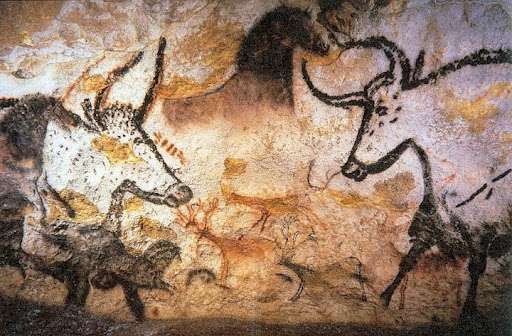 Known as what is believed to be the epicenter of Stone Age art, Lascaux in France certainly needs to be highlighted while discussing intriguing places in Europe.

The site contains almost 500 painted walls dating back to the Paleolithic Age, as far back as 20,000 years ago.

Some of the paintings on the walls are still intact, containing images of animals that existed during that period.

The site is also labeled as a UNESCO World Heritage, and it is thus limited for tourists to visit.

To provide tourists with a real-time experience of the cave, a decoy known as Lascaux II was created nearby for visitors, that mirrors the original cave.

With that, we conclude our list of some of the intriguing historical places in Europe that you can visit. We hope you enjoyed this list of historical wonders.

Let us know in the comment section which structure intrigued you the most! 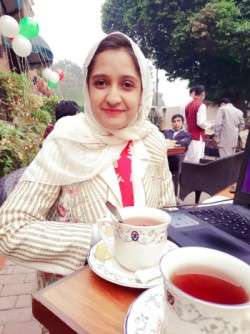 Zunaira Ghazal is an architect and designer on paper, but a 📝 writer at heart. She has a Bachelors in Architecture and a passion for traveling.

Both of which combine in her writings about timeworn castles and fortresses, that have withstood the tests of time and stand proud to this day.

I am happy to present this collaborative guest post in the hopes of offering travel inspiration and helpful information to you as well.

Pompeii {A Brief History Of The Lost City}