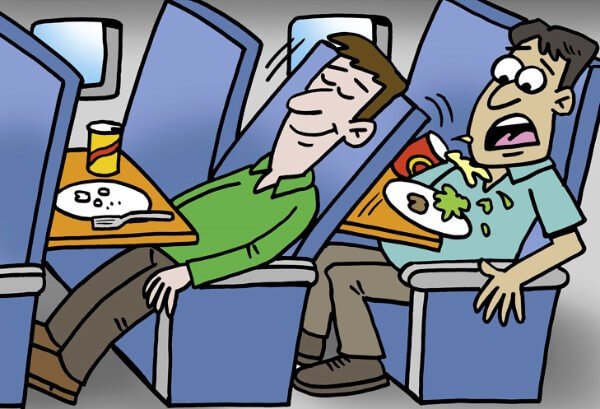 I recently came across a great article written in one of my favorite travel websites, about Reclining Airplane Seats and how annoying they can be for so many.

In fact, it still remains a very 🥵 hot topic of discussion!

Having returned from a very long ✈ flight from the Canada to Australia in economy class a couple of seasons ago, the article really ⚾ hit home with me.

It reminded me of my previous blog post I wrote on📰 airplane travel tips & etiquette, and why this topic really should be addressed further with the airlines.

When I travel more than 2 hours in a plane, I always try to book an 💺 aisle seat.It allows for a little more open space, and your free to stand up and sit down at your leisure.

But like most seats in economy class, even an aisle seat has its pros and cons.

First, let’s get started by checking out this interesting video from a famous American talk show host – Ellen DeGeneres.

Grab a ☕ cup of coffee, and listen as she weighs in on this – Reclined Airplane Seat Debate. 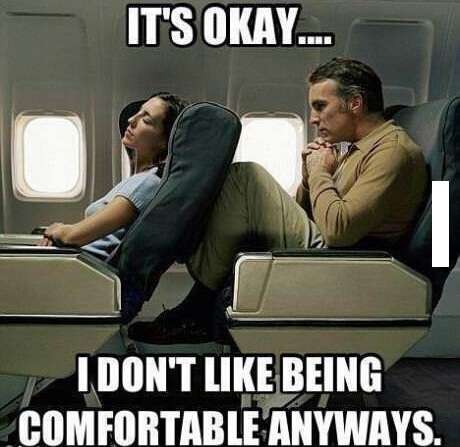 On this particular 🛫 flight and as soon as we were airborne, the person in the seat in front of me immediately 💺 reclined it as far as it could go!

Because these seats on this particular airline was cramped to begin with, I felt completely 🔐 locked in my seat, with no escape possible!

If I tried to move, I actually had to recline my seat and I’m only 5 ft 10 inches tall. It would also unfortunately, have a domino effect on the passenger seated behind me.

As well, it was almost impossible to try and watch a 🎦 movie on the tiny screen embedded in the reclined seat in front of me! 😒

Oh, How Nice To Be Able To Afford To Travel Business Or First Class!! 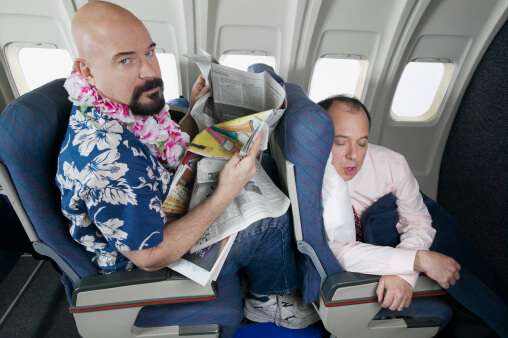 After experiencing over 12 hours of suffocating, cramped seating during this flight and having read this article, it made me wonder just how people really feel about seats in economy that are allowed to recline.

I know from experience, as soon as I recline my seat even the slightest, the first thing people do behind me to get in and out of their seat, is grab the top of mine like its a slingshot!

As luck has it, this usually happens when I have just closed my 👀 eyes for a 🐱 cat nap and about to nod off. 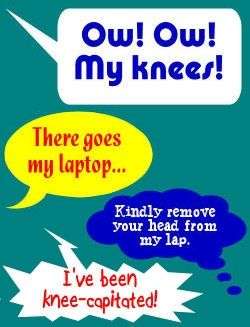 After about 8 hours into our flight, I looked over to the two rows of seats in front of me where two grown adult men were having a vocal argument over their seats.

The man in front of the other was complaining about the other man constantly grabbing, moving, pushing and kicking his seat as it was reclined. 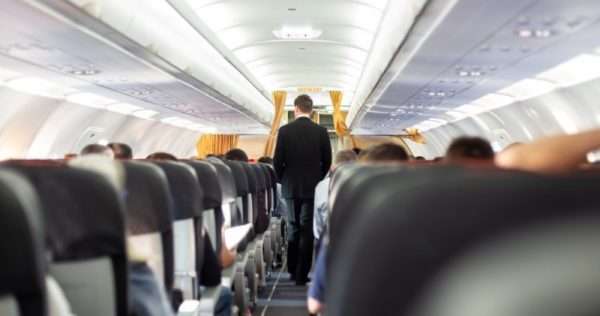 This altercation was all as a result of disputing over ones reclining seat.

On this particular aircraft, there was little to no room left for the passenger behind that seat, to move without bumping or touching the seat in front of him. 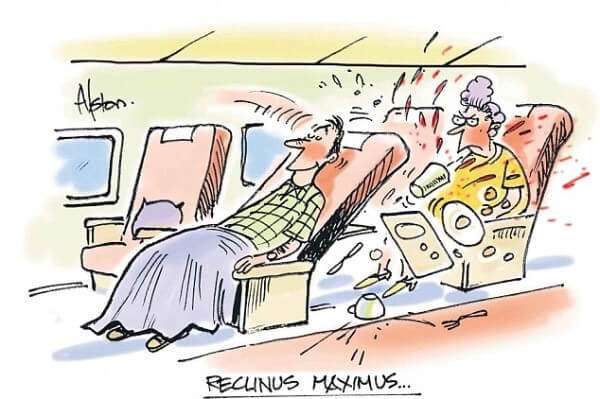 What I found most interesting about the article on this topic, was that most people traveling in economy class, do prefer seats to be locked in their upright position. 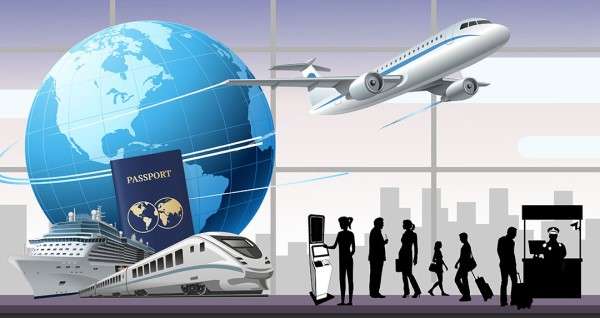 A survey that was conducted by ☁ Skyscanner (a well known European travel agency) revealed that;

🛑 Ninety percent of those surveyed would like to see a ban placed on reclining seats, or more strict rules in place for those longer flights.

I totally agree, and would be happy to have my seat stay in the upright position for the entire flight. I would gladly give up a few more inches in the recline position, to have more breathing space and comfort directly in front of me.

Why can’t 🛬 airlines put the seats in a more comfortable 🔒 locked position?

It seems like it could be such an easy fix, but I haven’t seen an airline implement this yet. The only exception I’ve seen is on exit row seats, where many are kept in the upright locked position. 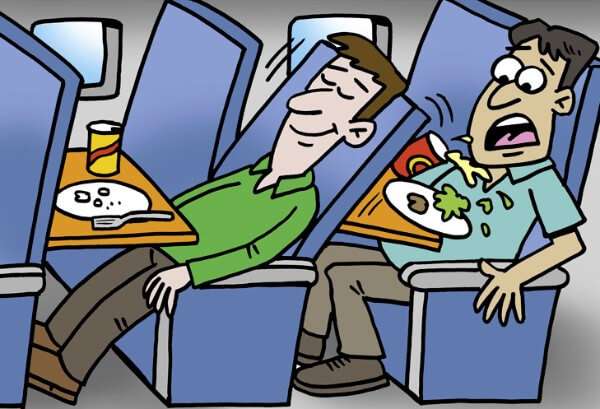 To me, as with most issues concerning etiquette and like my post on 💺 Pool Chair Etiquetteon 🛳 cruise ships and at those all-inclusive 🏨 resorts, it just boils down to simple common courtesy.

It seems like airlines are going backwards as far as ones comfort is concerned, now squishingyou in like 🐟 sardines. Wouldnt it be nice a nice gesture, if the person in front asked if it would be alright to recline their seat for a short while?

Do most people really not know or even care that some seats are so close together, and by reclining it would cause even more tight conditions?

If this is the case, then yes, I think more strict rules should come into play for seats on airlines. Ones that are so close together, you can barely get out of them without grabbing and holding on to the seat in front. 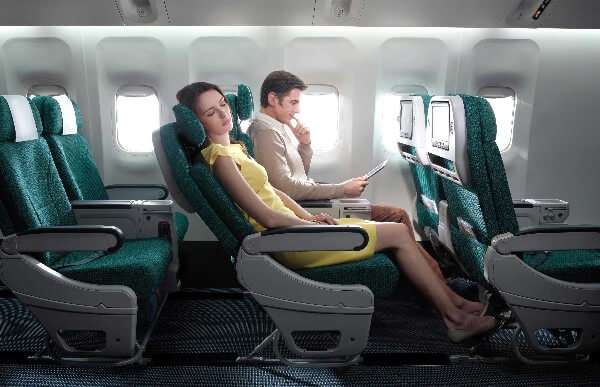 What I have seen in recent years, is the inclusion of – 💰 Premium Economy Class.

By adding an additional section on the aircraft, they can now have consumers pay more to get that extra leg room and a few other luxuries, but on a limited basis!

After years of flying in economy, I now try to take advantage of this whenever possible when we’re taking a long haul flight.

Or, we save our 💳 credit card mileage plan points to redeem for this upgrade or even to business class when we have earned enough.

It is nice to know that I am not the only one that gets annoyed by such things as this.

In fact, even many prominent travel professionals and critics are taking more notice these days. They are starting to voice their opinion more openly, especially regarding increased cramped airline seating and much more!

As years go by, airlines keep cutting back and charging more and more for everything they possibly can.At the same time, adding more rows of seats into their airplanes, making economy class long haul flights exhausting!

The Boeing 737 Is The Best-Selling Commercial Jetliner Around The World.”
🌴   Be Sure To Follow Me & Gr8 Travel Tips! 🌴

🧳   Beware Of In Flight Theft On Your Next Flight

25 Beautiful Birds in the Amazon Rainforest